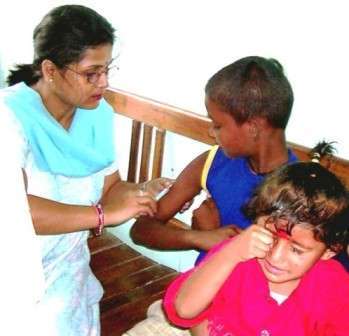 Health workers’ training is an essential part of the immunization program in Nepal. The Expanded Program on Immunization (EPI) is a priority program of His Majesty’s Government of Nepal. EPI is considered one of the most cost-effective health interventions. Vaccine-preventable diseases are routinely reported through the HMIS system, complemented by appropriate surveillance, outbreak investigations, and responses. The main objective of the EPI program is to increase routine immunization coverage and decrease dropout rates. The immediate goal is to eliminate neonatal tetanus, reduce measles morbidity and mortality and eradicate poliomyelitis by the end of 2005.

National coverage of different vaccine-preventable diseases has shown satisfactory results. In the fiscal year 2057/58, Saptari had the highest range (87%), followed by Siraha (83%) and Jhapa (81%). In contrast, Morang and Sunsari districts had comparatively lower measles coverage among Terai districts in Eastern Development Region. At the district level, immunization coverage differs, and many communities have shown sub-standard performance. The health care provider’s role is essential for better achievement. It has been proved that a training component is a tool for the success of any program. Implementing different training activities in immunization and other health areas has significantly impacted program achievement.

successfully resulted in a measurable increase in measles vaccination coverage in Morang and Sunsari districts. Morang and Sunsari districts have experienced a remarkable rise in measles vaccine coverage, which was also statistically significant (P<0.05). Training workshops are helpful for poor-performing communities to strengthen the EPI program.

Dr. Nawa Raj Subba Who was it that gave birth to existence and the universe? Curiosity is something that everyone has. It’s an age-old question with no clear answer. We’re reviewing myths for new information based on existing knowledge. Our forefathers and mothers wondered about this as well. It is impossible to know indeed what…

Dr. Nawa Raj Subba~ An ethnicity’s religion manifests itself in its culture (Mulder, 1985). Religious faith passes down from generation to generation through life experience, perception, and society (Geertz, 1985). Religion and culture are thus inextricably linked. The above-mentioned remark implies that a person of any faith or culture could be plagued by his family’s…